What are the disadvantages of conventional motor-driven refrigeration compressors?

In a conventional refrigeration setup, a compressor is usually coupled directly to an electric motor. When switched on, full voltage is applied to the motor. This causes a brief but tremendous inrush of current, many times more than the system is designed to handle. This rush of current, or ‘current spike’, cannot be avoided. You can only try to counter its effects.

This conventional system has the following major disadvantages: 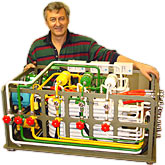 The JEC ‘Soft-Start’ DC motor controller prevents heavy power surges and reduces the high torque loads on belts, bearings and other equipment. It does this by starting the motor and engaging a clutch at a very slow speed. The motor speed is gradually increased and, when a clutch needs to be disengaged, the speed decreases to almost zero.

The controller is designed to limit the maximum power of the electric motor for any given compressor rpm load. This protects the motor, compressor and Genset from overload and allows the gas to be compressed gradually.

As a result of the soft start and current-limiting features, a much larger compressor can be used, shortening cooling times from hours to minutes despite the much smaller Genset. In addition, the full amount of current can be drawn from shore power. Using the JEC Soft-Start motor, we have drawn up to 47% more current from a circuit breaker than under normal single phase hard start.

The JEC Marine Combi System uses the propulsion engines to drive one of the compressors, eliminating the need to run a Genset while under power.

These features greatly reduce, or even eliminate, most of the problems associated with direct-coupled, non soft-start systems.